Miroslav Barnyashev well known as “Alexander Rusev” (born December 25, 1985), is a Bulgarian professional wrestler and former powerlifter and rower, better known by his former ring name Alexander Rusev and currently performing as Rusev (Bulgarian) on the Raw brand. He works for the American professional wrestling promotion WWE, where he is the current United States Champion in his second reign. Barnyashev is the first Bulgarian to have wrestled for WWE.

Barnyashev, along with other VPW wrestlers, appeared in the music video for the song “The Whole F’n Show” by Kushinator (the entrance music of wrestler Rob Van Dam).nAs Rusev, he made his video game debut as a playable character in WWE 2K15, and has his own path in the “Who Got NXT” mode. He appears in the next game in the 2K series as well, WWE 2K16. He appeared in the 2016 WWE film Countdown.

On July 19, 2016 at the 2016 WWE draft, Rusev along with Lana was drafted to Raw, taking the United States Championship with him. On the August 1 episode of Raw, after Rusev defeated Mark Henry to retain the title, Roman Reigns came out to confront Rusev. The following week, Reigns interrupted Rusev and Lana’s wedding re-enactment, and issued a challenge to Rusev for the title. Rusev declined, and the two brawled, causing Lana to fall into a wedding cake. Backstage, Mick Foley told an angered Lana and Rusev that Rusev would be defending his U.S. title against Reigns at SummerSlam. Later that night, Rusev successfully defended his title in an impromptu match against Cesaro, who felt that he should also have a shot at the title. 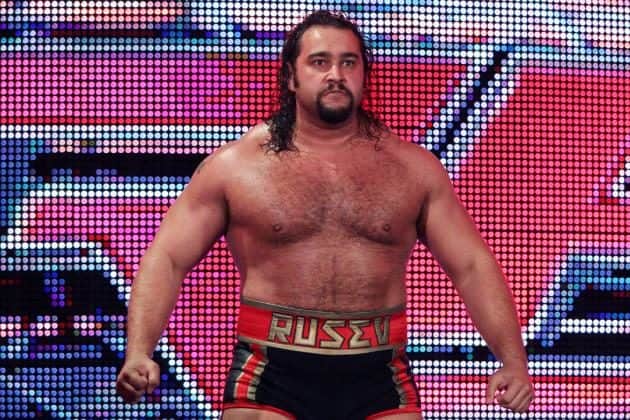