Cyrus Broacha is a TV anchor, theatre personality, comedian, political satirist, columnist, podcaster and author. He is also a prankster, best known for his show Bakra on MTV and his show The Week That Wasn’t on CNN-IBN.He has also given voiceover as Angada in cartoon film Ramayana. After graduation, Cyrus went to the Lee Strasberg Theatre and Film Institute in New York where he studied acting for theatre. After returning to India, he acted in many commercials, television serials and plays. He also hosted shows and corporate events, while pursuing his passion of theatre with over 20 commercial theater productions.

Cyrus has hosted many cricket shows including the popular Chevrolet Cricket Show on Ten Sports, and interviewed nearly every cricketer from every generation. Broacha anchors a news satire and comedy show, The Week That Wasn’t on CNN-IBN, co-written and directed by friend Kunal Vijaykar. He presents the show Faking News on IBN 7, directed by friend Vijayakar. He led India’s “Rock the Vote” campaign and represented MTV at the UNAIDS conference in Hanover, Germany. He moderated the Indian segment of “Be Heard – A Global Discussion With Colin Powell” in February 2002.

He appeared on Sony Entertainment Television’s hit show Jhalak Dikhhla Jaa, India’s version of Dancing with the Stars, and Fear Factor – Khatron Ke Khiladi Level 3 on Colors TV. He is also a columnist who writes for two leading national papers and two magazines. He hosts an annual show called Greenathon on NDTV. 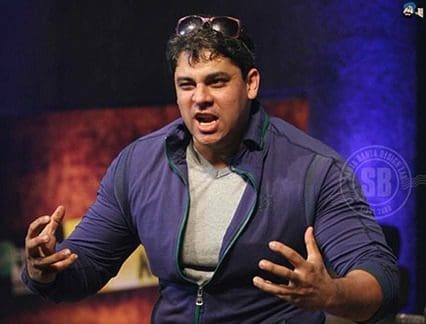 Cyrus Broacha has acted in the following Hindi movies:

In January 2010, he released his book Karl, Aaj aur Kal, a semi-autobiographical comedy about celebrities, Bollywood and politics. It traces the lives of two young best friends, Karl and Kunal, giving a humorous, tongue-in-cheek and witty account of how they make it big in Tinseltown. In 2011 he released another book, The Average Indian Male, which is a riotous account of the Indian male commonly referred to as the “aam aadmi”.[2]

In 2015 he started a podcast called Cyrus Says. Cyrus Says is an irreverent podcast on current events.Cyrus Says is the definitive show on life in urban India, politics, sports, civic sense, traffic, kids, food, and everything that matters.