Christine Jane Baranski (born May 2, 1952) is an American stage and screen actress, and is known for her Emmy Award-winning portrayal as Maryanne Thorpe in the sitcom Cybill, Dr. Beverly Hofstadter (Leonard Hofstadter’s mother) in The Big Bang Theory and her Emmy-nominated portrayal of Diane Lockhart in The Good Wife. Prior to her appearances in film and television, Baranski rose to prominence as a Broadway actress, winning two Tony Awards, and has continued to work in the theatre alongside her screen appearances. Since 2009, she has played the role of Diane Lockhart, a top litigator and senior partner of a Chicago law firm on The Good Wife. She was nominated for Outstanding Supporting Actress in a Drama Series in 2010, 2011 and 2012. Besides her work on The Good Wife and the aforementioned guest appearance on The Big Bang Theory, other recent appearances include Ugly Betty in 2009 as Victoria Hartley, the haughty mother of Betty’s new boyfriend. 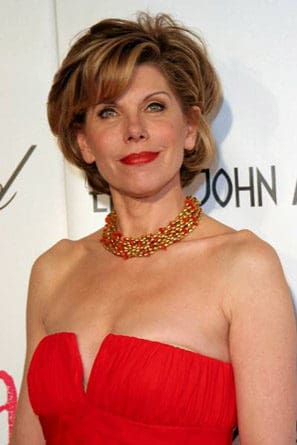